“After the third flip, I lost control.”

Speedbound is one of a kind. Play racing games for free and win real prize money! This has never been done before. Have fun! 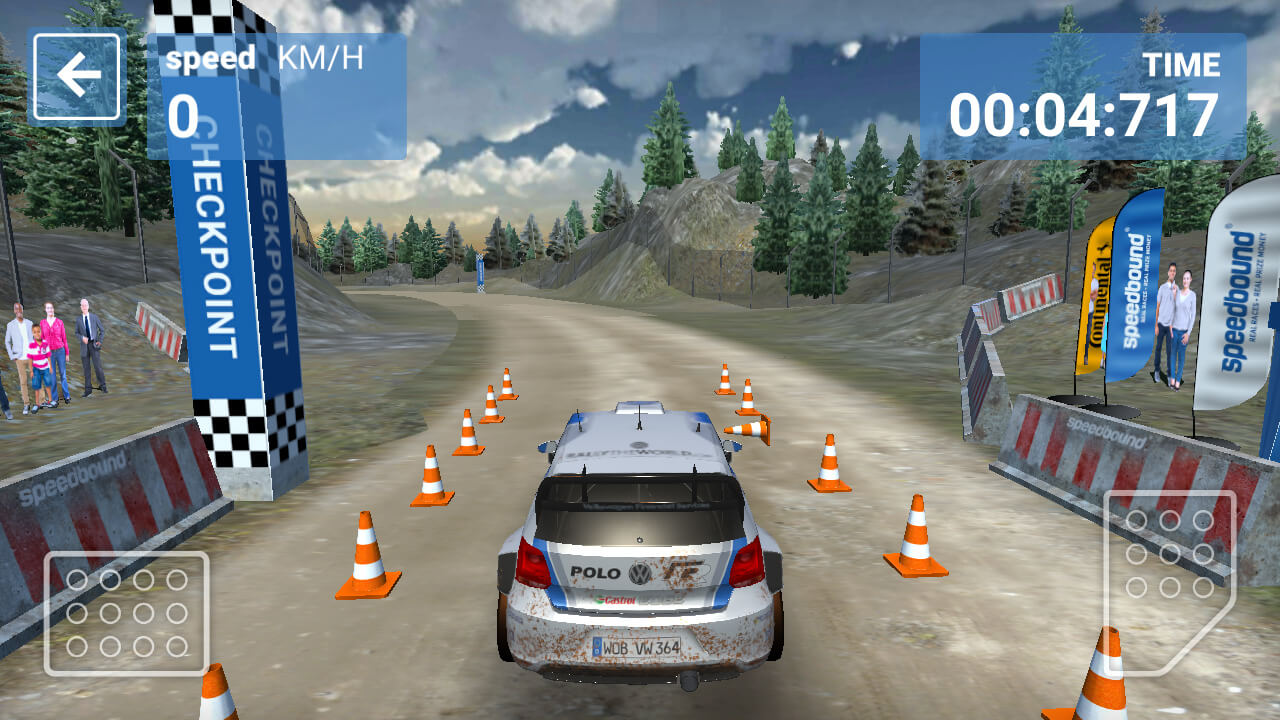 Prove your skills in single player rally mode. It’s just you, your car, the track, and the trial clock.

You can repeat the race as many times as you like. Every new best time increases your position in the online rankings. If you are at the top at the end of the month, you win the top prize. 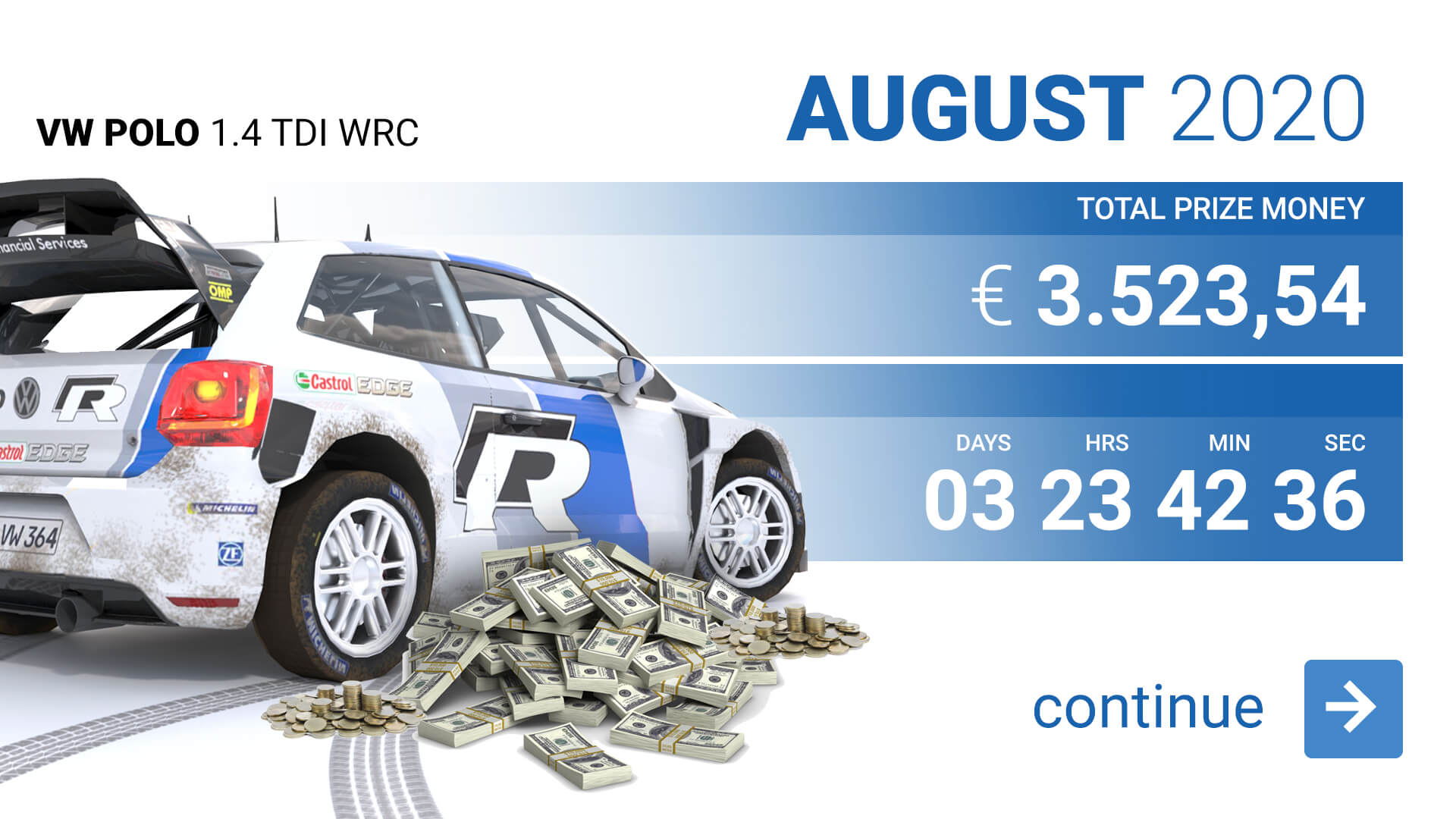 There’s a new race with a new car on a new track on the first day of every month. And with that come new prizes!

Each race ends on the last day of the month at 6:00 p.m. Central European Time. A new race begins right after for the following month. 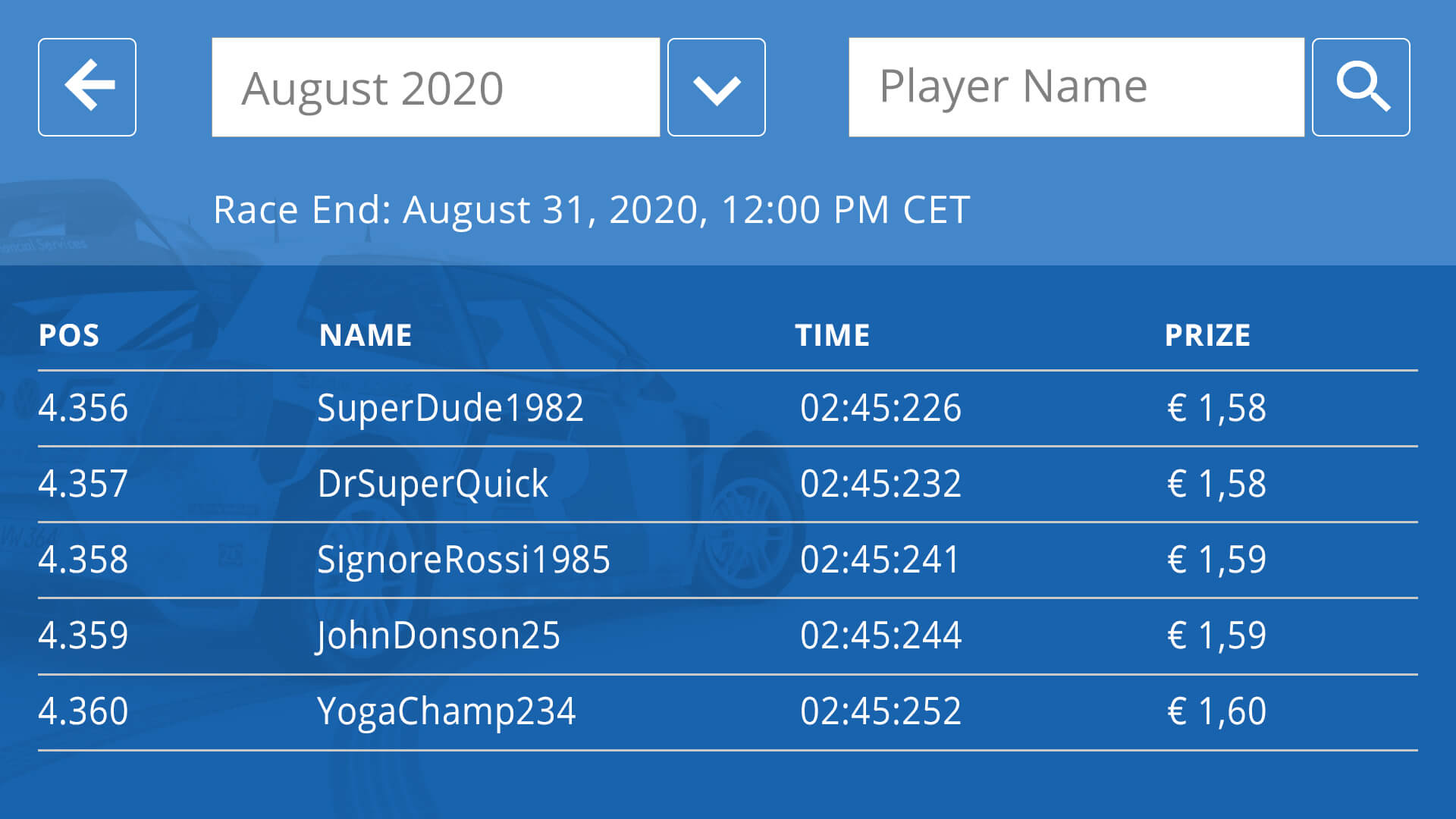 The online ranking lists each driver’s best time. Your best time is also included. It shows you where you rank compared to other – and how many seconds away you are from the top score. The ranking resets every month. 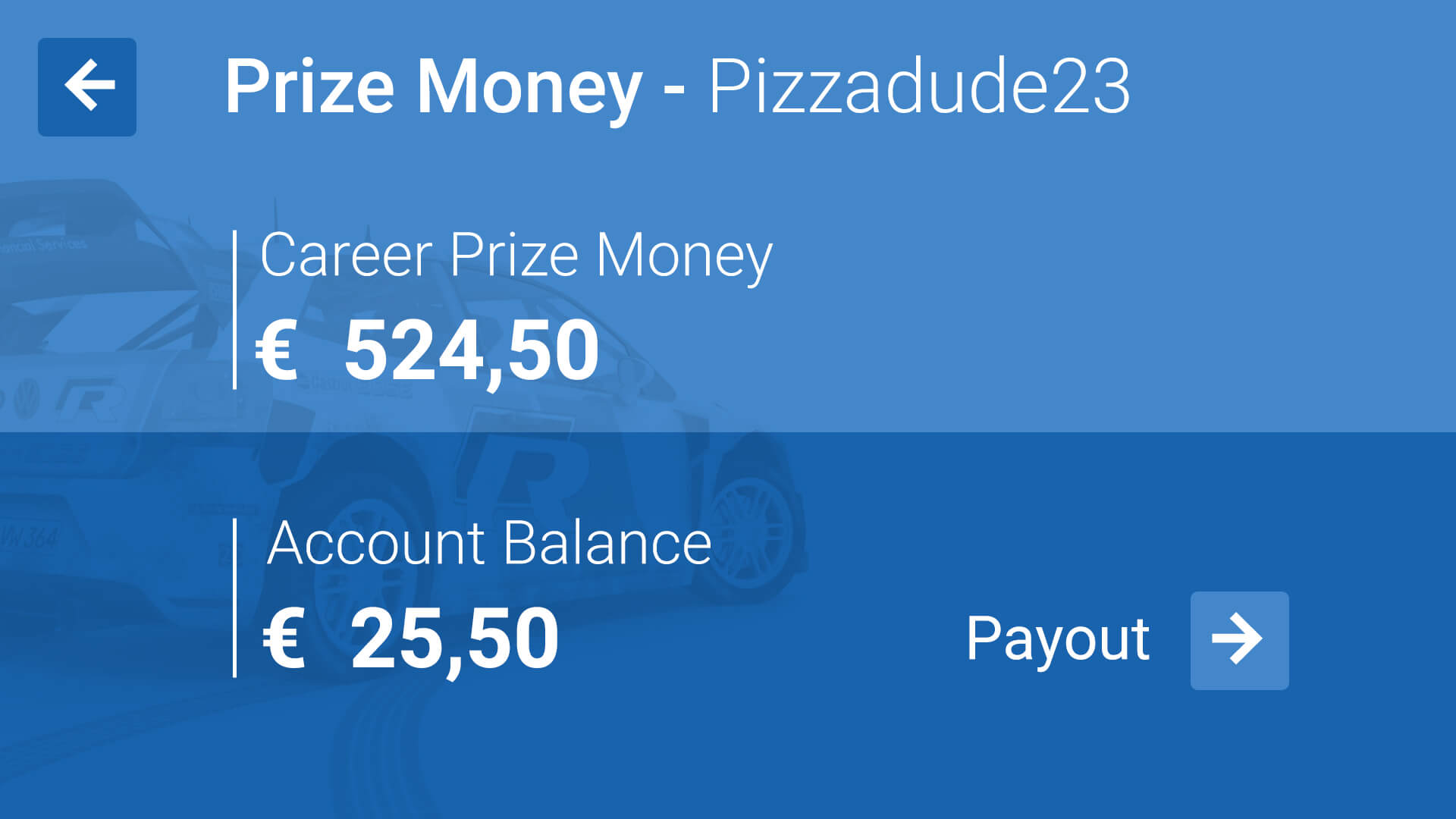 You can keep your money. And you can win ours. At the end of each month, we pay out prize money to the winners. The amount you win depends on your position on the online ranking. The top 10% of drivers win real money. 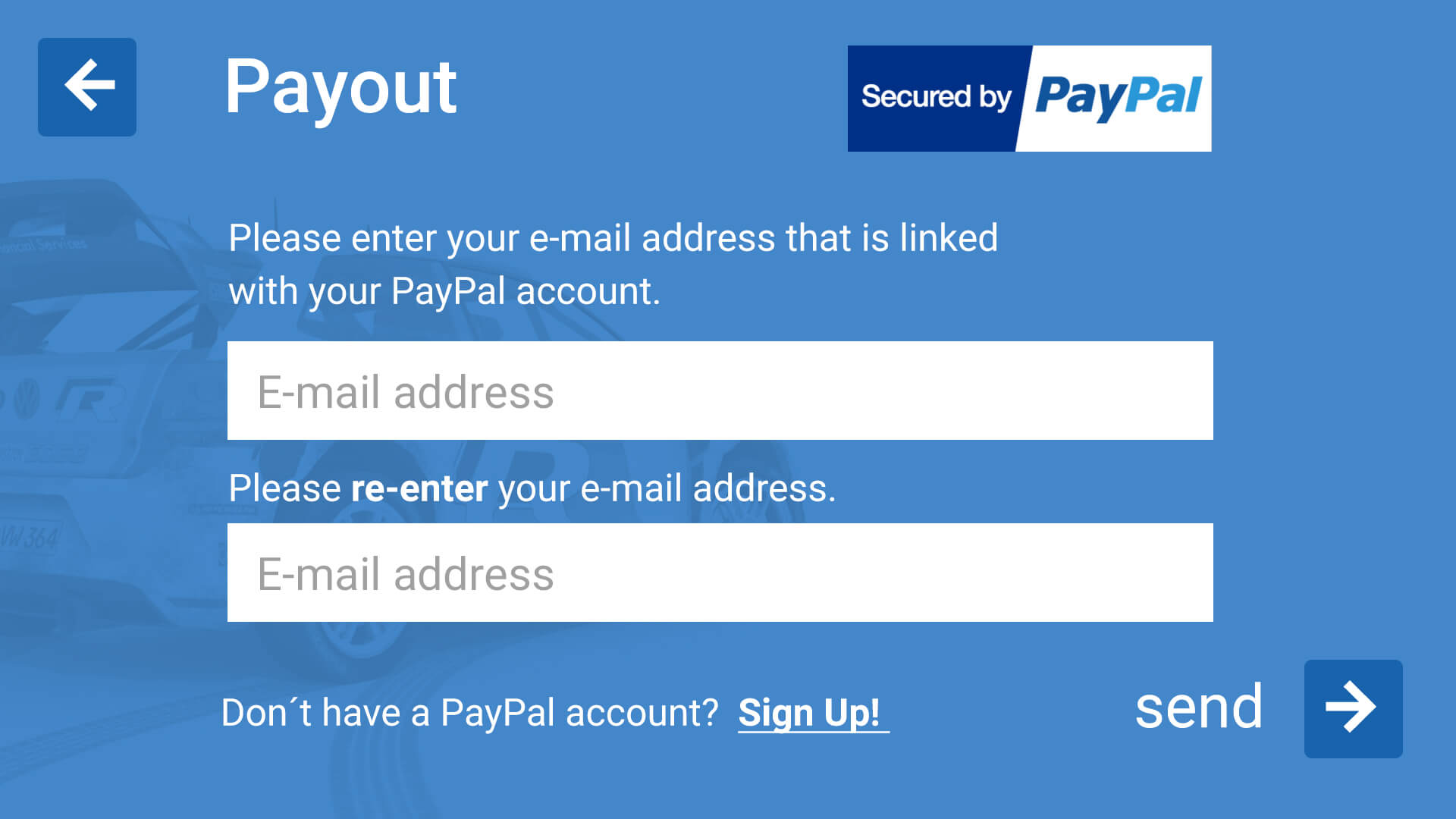 To receive the prize money, you need a PayPal account and you can have your prize money paid out at any time.

You can find out more about PayPal account in the FAQ.

Here you will find useful answers to the most frequently asked questions. If you can’t find the answer to your question, please contact us. Use the contact form at the end of this page.

Speedbound is completely free. Seriously. All you need is your racing skills and your time.

How do I play Speedbound?

You can start playing and racing as soon as you open the app. If you want to be eligible to win prize money, you have to log in with your email address. This allows us to enter your results in the online ranking to compare with other drivers. (More on this can be found under “Do I have to register?”)

Where can I find the Speedbound app?

You can find the Speedbound app on Google Play (Android) or in the Apple App Store (iPhone). You can easily find the app by using the search function. Just install and open – that’s all you need to start racing.

Do I have to register with Speedbound?

There is no requirement to register, but there are advantages in doing so.

You can play the game and race as much as you like without registering for each race.

You only have to register if you want to win prize money. Only registered users can have their best times recorded and entered into the online ranking. (More about registration under “How do I register?”)

In the main menu of your Speedbound app please tap “Login” and then “Reset Password”. You will be asked to enter your email address you used to register at Speedbound. After entering your email address please tap on “Send”. We will then send you an email with instructions and a link that will redirect you to a page that allows you to enter and confirm a new password.

What permissions does the app require?

The Speedbound app only needs access to the internet to enable you to log in and to store your race results.

Speedbound does not need any other permissions. No microphone, no camera, no access to contacts or pictures. Your data belongs to you.

Are there in-app purchases?

No. Speedbound is free, easy, and fair. We do not offer in-app purchases. Every driver is given the same conditions. No one can purchase race advantages.

Please write to us using the contact form at the bottom of the page. We will look into the issue as soon as possible.

Safety and fairness are top priorities at Speedbound. Therefore, we punish all attempts to defraud and block offending accounts immediately. All of the player’s results will be deleted from the leaderboard.

What happens if you attempt fraud?

We reserve the right to block the account in the event of an attempt to defraud. In addition, we block the smartphone associated with the account from new registrations

We consider attempts at fraud to be behavior that can endanger equal opportunities or the security of the game.

How long does a race last? When does it start and end?

Races start at the beginning of each month. For example, on January 1st at 6:00 p.m.

How many races are there?

There is currently one race per month. Every month, a new race starts with a new car on a new track, and a new ranking list.

Can players race against each other?

Yes, but indirectly. Each driver races by themselves. However, drivers can store their best time in the online ranking if they are registered and logged in. So, racers can challenge each other to beat their best times.

How does the online ranking work?

You can always see where you stand in the ranking. You can see if you are in the top 10% of racers who will receive prize money at the end of the month. And you can see how many seconds behind you are.

Does every race have its own ranking?

Every race starts at the beginning of the month with a new, empty ranking list. All results from the previous month are deleted. The new ranking list remains active until the end of the month. During this time, every new best time is automatically saved.

Does the ranking apply to all races?

No. Every month starts with a new ranking, a new car, and a new track. This is why rankings for previous races cannot be compared.

Can I purchase other racing cars or tune my racing car?

No. We want to offer you pure and fair fun. It’s not about buying game advantages with money. A new driver should have the same chances to win as a driver who has been playing for a long time.

But variety is guaranteed. Because there is a new race car every month.

Is there a version of Speedbound without advertising?

Unfortunately, no. The advertisements ensure that Speedbound is free for you and allow you to win prize money.

I can't upload my best time. Why?

Did you register or were you logged in before the race?

If you were logged in, please check whether your smartphone is connected to the Internet. For example, can you access www.speedbound.com with your browser?

If you are not online, your best time cannot be transferred.

Can I save my race time locally?

That is not intended. This enables us to ensure that nobody manipulates their data locally. In addition, the Speedbound app would need additional authorizations for local storage. We don’t want to do that.

Your best time is therefore automatically entered in the online ranking.

Every month, the top 10% of all drivers win real prize money.

A new race starts on November 1st. By the end of November, 500 registered drivers had driven the race and had their best times recorded in the online rankings. The fastest 50 drivers receive real prize money.

How much prize money can I win?

The amount of the prize money depends on two things:

1.) Your position on the leaderboard.

If you are among the 10% of the fastest drivers at the end of the month, you will win prize money. The better your position in the ranking, the more prize money you win. The system calculates the exact proportion using an algorithm.

2.) The number of players

The more drivers take part in a race in the course of a month, the more prize money there is. The jackpot grows until the race is over. At the end of the month, the entire sum will be distributed among the fastest 10%.

Where does the prize money come from?

Speedbound is financed through advertising. The more players participate and the more often they race, the more often an advertisement can be displayed. And with each ad, the jackpot grows a little more. The jackpot will be distributed at the end of the month. (More on this under “Who wins real prize money?” And “How much prize money can I win?”)

How can I withdraw my prize money?

Any amount larger than 1 euro can be paid out immediately. You need a PayPal account to receive the payment. You simply initialize the transfer in your Speedbound driver box.

When do I get my prize money?

Each race ends on the last day of a month at 12:00 noon, Central European time. The entire prize money from the jackpot is then credited to the player accounts of the top five percent of all players on the ranking.
You can have your prize money withdrawn from your player account to your PayPal account at any time.
Due to high transaction and bank wire costs, depending on the country of origin, any prize monies can only be distributed to you if you have a prize money balance of at least 1.00 EUR.

Why don't I see any prize money in my player account?

Can the prize money be paid out with something other than PayPal?

Unfortunately, no. We chose PayPal because it is very popular and easy to integrate. Credit card or wire transfers would cause more effort and costs. And we want as much money as possible to go towards the prize money jackpots.

I have received an error message from PayPal. What do I have to do?

Unfortunately, we have no influence on error messages with PayPal. Please contact PayPal directly. The problem has nothing to do with Speedbound, so unfortunately, we cannot help you.

Copyright Speedbound 2021 - All Rights Reserved
Back To Top